Sasquatch novel, The Encounter is Book 1

What is the significance of this mysterious creature's presence amongst the human race?  Who are these Beings and why is so little known about them? How do they continually escape the Bigfoot hunters and chasers so dead set on videotaping their antics?   My close encounters and conversations with Sasquatch may have answers to some of these universal questions.  They tell a much different story than a wild man-ape terrorizing campers in the woods. Meet Loquiis, Leeitus, Pureesis and Loquiili, a Sasquatch family living in harmony with nature and undetected right under the noses of those that can't find them. 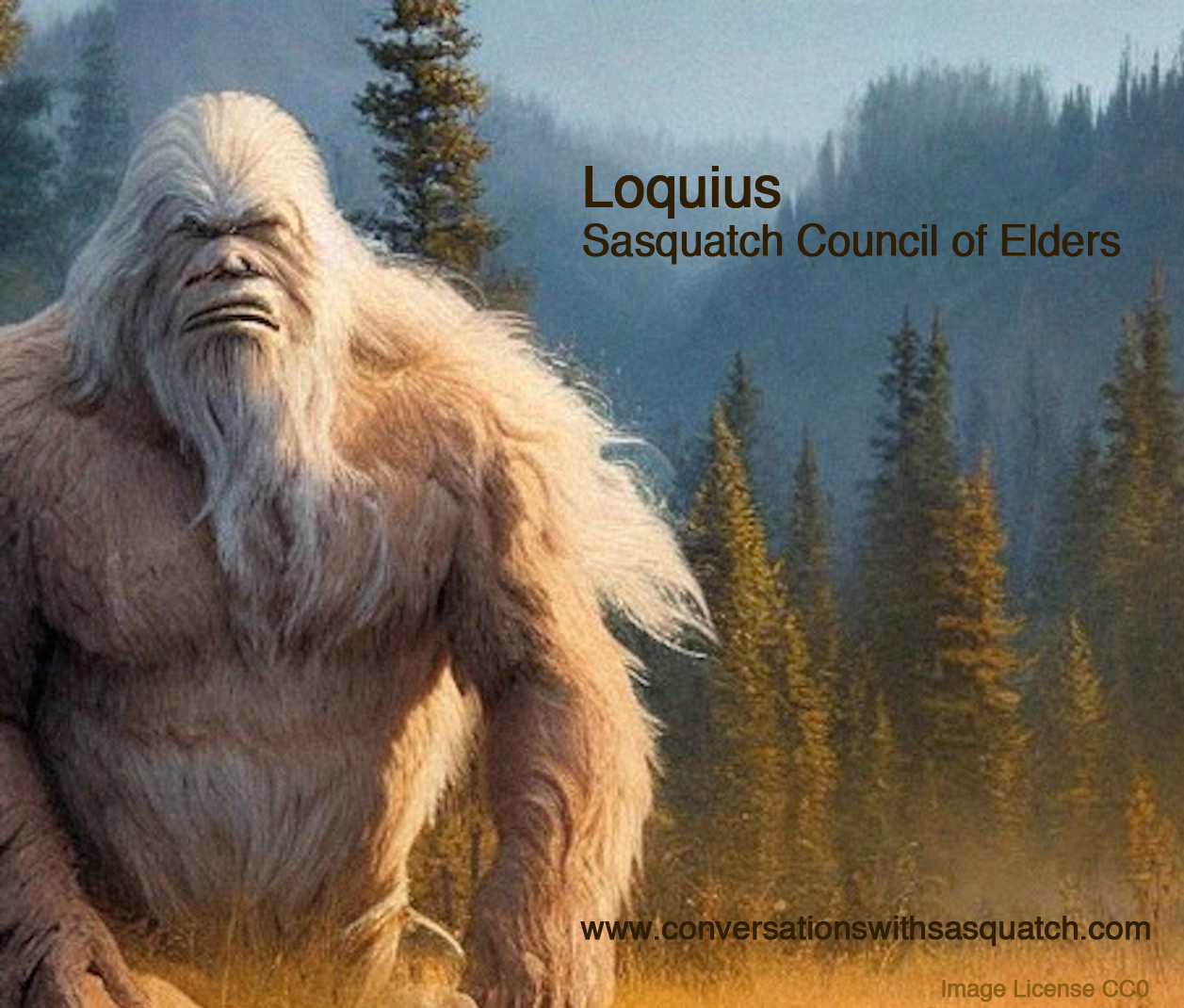 A Look Inside Conversations With Sasquatch, The Encounter

Conversations with Sasquatch, The Encounter

I have had to readjust my beliefs and rethink many an opinion since I met a Sasquatch while out hunting for morel mushrooms in Lewiston, Michigan. I had no idea that these mushrooms were high on their list of dietary delicacies.  They prize and love them.

I would have been afraid and crapped my pants if it hadn’t been for the long outstretched arm that offered me a half eaten morel.  There was nothing aggressive or hostile in this gesture.  He effused a welcoming aura of curious friendliness.

I took the half-eaten morel and popped it into my mouth.  As I shook my head affirmatively, I offered him my paper sack that contained about twenty morels and two or three beefsteaks I had gathered along a cedar ridge beside Big Creek.

It was then that I noticed the pure silence that had fallen over the forest.  The crows look-out caws had vanished, the squirrels had shushed their chatter and rattle in the trees.  Not even a bluejay or a mosquito was daring a peep.

I struggled to swallow the copper taste that had encroached to dry my mouth.

Sasquatch smiled.  He had jaws filled with yellow teeth and eyes that twinkled with delight.

“Thank you,” he said, and jiggled his lips like a horse as it eats a sugar cube off your hand.

“You’re welcome,” I replied with another swallow.

“There’s a storm in the air,” Sasquatch offered with a gesture towards the sky, “the ozone is lifting my hairs.”  He proceeded to run his hand a few inches above his upper chest where I could see the hairs stand up as if a magnet were being run over a cache of metal shavings.  He abruptly slapped his chest and laughed.  It sounded eerily like the shriek of an eagle guarding its kill.

The sky was clear, but I thought I could hear a distant rumble of thunder to the west.  I couldn’t remember any rain being in the forecast.  I had come dressed only in jeans, a polo shirt and sneakers.

“You humans are such frail creatures,” he said.  “I remember when you were more like us, hunters and gatherers of the health and fruits of The Creator.”

I really couldn’t tell if he was speaking to me verbally or telepathically.  There was such a sense of otherworldliness. I had a hard time getting a grip on my racing thoughts and emotions.  In the absence of abject fear, I felt a combination of elation and serenity.  I guess it was what you’d call dumbstruck.

“Not much of a talker, are you?” he asked and popped a fresh mushroom into his mouth.

“I have never met a Sasquatch before,” I managed.

“Not many a human has,” he whispered conspiratorially.  “You are the first in many thousands of years I have spoken to.  You are the chosen one.”

“I am honored,” I humbly croaked.

“I am not so sure you should be.  You humans are blowing it.  You are blind to the world of the Sasquatch.  You have lost the memory and instinct of your body’s genes and the very essence of your immortal soul.”

A darkness crept stealthily over the ridge. Lightning flashed and a huge clap of thunder reverberated off and rattled my teeth.  I began to shiver uncontrollably as Sasquatch melted into the rain with a welcoming gesture meant for me to follow him there to wherever there was going to be.

What People Are Saying About
Conversations With Sasquatch The Encounter

Shiri-adellie Ohara-green.... So i get up this morning and see a notification on my phone that the next part of conversations with sasquatch has been posted. Of course, in my excitement, i forget i was getting up for work, and dive headfirst into this next installment. What i read had me captured already, but then to read about ted kaczynski!?! My mind is blown, and i realize my eyes have literally widened with amazement... I have to find out more about this stunning revelation! As i finished reading, i remembered why i had originally gotten out of bed, and in a panic, start scrambling to get ready for work. But then i remember today is Saturday, we open an hour later on the weekends. So I've got an extra hour to play with! Not even 9am, so between waking up to an amazing read, and an extra hour to enjoy before my work day begins, it has been a great start to the day! Thank you Richard Rensberry

Linda Mecca Green..... Richard Rensberry your superb writing is so visual. I feel as though I can see, hear, taste what you are experiencing. Please continue to share your writing.  Thanks for accepting my friend request. I have a few authors in my friends list so I appreciate your name being added to that list. Before I retired a few years ago, I worked in the PR office at a liberal arts college in Pennsylvania... that fact does not matter other than I recognize the marketing and writing value of what you do. Mostly, I just really enjoy your story telling about Big Foot! Reading your bio explains your way with words and how they paint a literal picture. It seems so real and from the heart, doesn't every author want to hear that? Thank you for sharing your writing/experiences on the various Big Foot pages. I'm ready for part 9! Take care.

Im going to read from chapter one , as ive only read your last two chapters, as its an intriguing tale. And youve made me think im on the right track of sasquatch being more than just hairy and scary. I hope theres plenty more chapters to come on this sasquatch journey. Never stop beleiving!

Tammy Loomis.... Well, this is interesting...didn't expect to hear anything quite like this! Curious to learn more…?

More praises for Conversations With Sasquatch

Robin Brou Antin.... Hi Richard FYI I’m in the flap-trapping healthcare provider. Category. And the reason I became so interested in this is because I heard a story told by a 40 something 20 years ago about his experience as a child in his grandparents property . He was all of 6 and fishing in a little backyard pond as he had done numerous times . He had a sandwich and 3 little fish at his side when a shadow casted over him . Thinking his grandpa snuck up behind him he turned around, dropped his pole and urinated on Himself as he saw a massive “thing” . He saw it looked at the fishes there at his feet and he instinctively threw his sandwich at him. The squatch leaned over grabbed the fishes and turned and walked away while we was stone still but when about 20 feet away the squatch turn back and threw back one of the three fish so he the little boy wasn’t left without anything ‘to eat ‘... wow compassion or something.. not sure what to call it .. sort of being not such as ass for stealing all your food .. but this story moved me to see the complex emotions that this animal must have . I was hooked ever since hearing this . Be safe out there

Lauren Elizabeth McCormick.... This is very well written. I have trouble getting into stories, but I think I could reread this over and over. I always think that the Forest people need an ambassador to speak for them. It would be interesting to know what they know, since they are so ancient and connected to the earth. I can’t wait to read the rest of your story!

Keith Slack.... What kind of shrooms were you eating???

Bob Lawrason....  I love this book and the way the Sasquatch use kenaf. Great book for fun with insights into social justice and more. Spread the word about kenaf while getting a unique gift for others to enjoy.

Jackie Imoff.... You definitely have a gift with words. Thank you for sharing. Did you do the illustration yourself? It is also very creative.

“This is your planet in Cross Over,” he states.  “You will not be able to stay long.  There are those in the Council that feel man is undeserving of Sasquatch help.  They want nothing to do with your rapid descent away from natural law and your selfish ascent into narcissism.  They believe you are committing suicide.”

I am caught off guard and offer no defense to these blunt charges coming from a Sasquatch.

“Some members of the Council do not think that your demise will effect our demise,” Loquius continues, “but I believe differently.  I have supplied to the council, indisputable evidences of the technological poisons that have been seeping through at the Cross Over edges.  There is evidence that shows that man-made poisons are rapidly eroding and shrinking not only your world but ours.    Your human selfishness, pesticides, herbicides, 5G microwaves, pharmacopeia and genetic engineering are rapidly destroying your world and will destroy ours along with it.”

I decidedly want to wake up and get back to a place called Sanity.  This is nuts!  I am being lectured by a Sasquatch.

“Do you recognize the name Ted Kaczynski?”  Loquius asks. 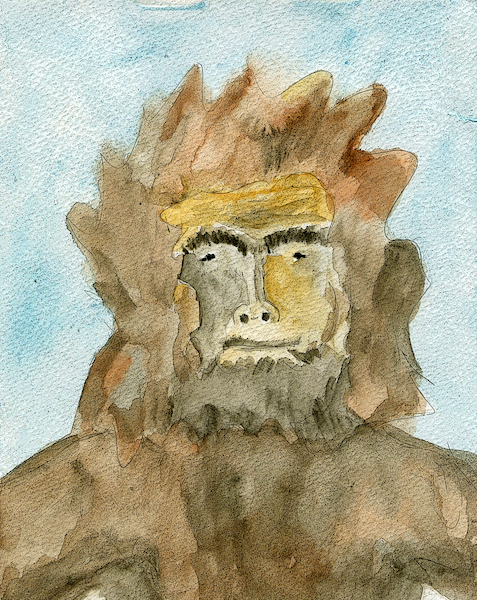 Conversations With Sasquatch,
The Encounter
is available on Amazon

abhor*-  regard with disgust or hate

abject*-  experienced to the maximum degree

adrenalin*-  hormone secretion from the adrenal glands for extra power and energy in times of fear, excitement, etc.

Al Kaline*-  Detroit Tigers baseball power hitter that batted fourth in the lineup back in the 1960's and 70's.  He had many homers during that era

attuned*-  in harmony or agreement

auras*-  the electrical and emotional emanations surrounding a body

beefsteaks*-  an edible mushroom similar to the morel but much larger and irregular of shape, reddish brown in color

Beretta*-  a brand of handgun

cache*-  a hidden collection or store of items of some type

conspiratorially*-  a planning and acting together

crepuscule*-  the hour of twilight

delusional*-  seeing things that aren’t there or real

edible*-  fit to be eaten

effused*-  poured out or forth

egress*-  action of going out or leaving

epitome*-  having the characteristics or quality of the whole.

guttural*-  from deep in the body

hallucinated-  saw things that were not actually there

idiosyncrasies*-  any personal peculiarity  or mannerism

manifesto*-  a public declaration of aim or intent

Mida*-  Native American name for a medicine man or sorcerer

narcissism*-  an excessive interest in or admiration of self, selfishness

oblivion*-  state of being forgotten

perchance*-  by some chance

penchant*-  a strong liking or taste for

periphery*-  at the edge of one’s vision

perusal*-  a brief glance over

racking it up to*-  to decide something

super-max*-  federal prison for the most dangerous of criminals

switchbacks*-  winding paths of gradual descent down a steep embankment

telepathically*-  from mind to mind without speaking

traipse*-  to walk or wander, trudge

trajectory*-  path taken through the forest

trek-  a long walk or journey

unequivocally*-  in a way that leaves no doubt