Bigfoot Wolf Guardian of the Wild 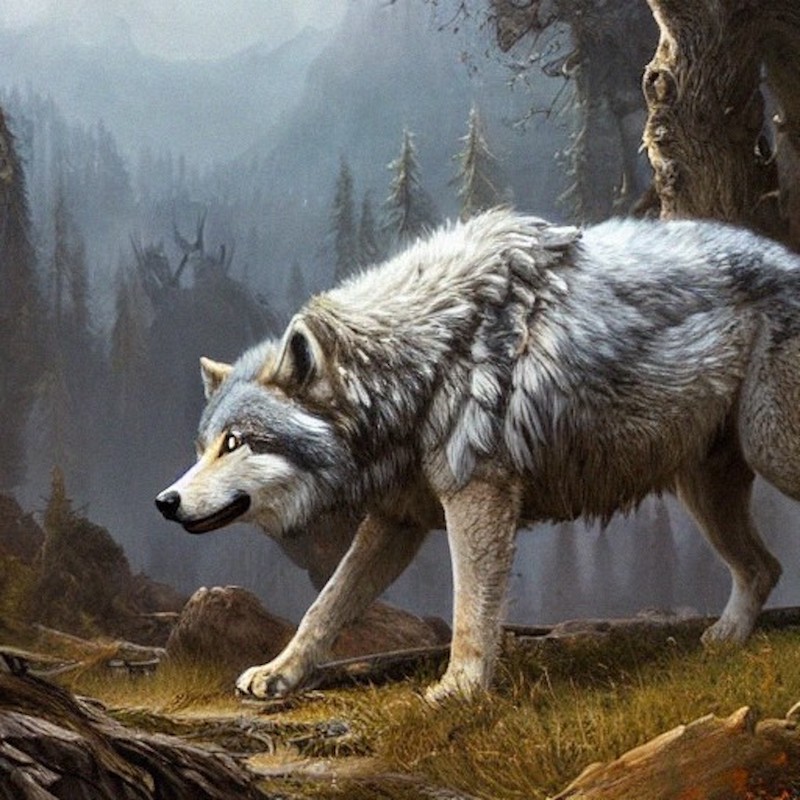 The Bigfoot wolf guardian of the wild is an enormous regal animal held in great regard.  These creatures can be found at the side of most Sasquatch children and when full grown are large enough for even an adult Bigfoot to ride upon.

Bigfoot Wolf Guardian
of the Wild
are Pets to the Sasquatch

My first experience with a Bigfoot wolf guardian of the wild occurred on a forest trail in Cross Over.  Rather than retell the story, below is an excerpt from my first book, Conversations With Sasquatch, The Encounter that describes that first meeting. 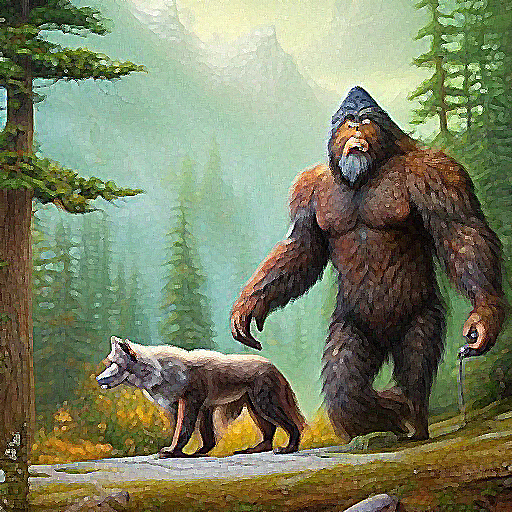 When confronted with the realm of the unknown, confidence and certainty are definitely the life jackets on which we have to rely.  Without them, we are at the mercy of our lesser human emotions and reactions, such as fear, anger, and despair.  The vibration of emotion in one person can ignite a like emotion and vibration in another, like a tuning fork.  I believe that is the case even with animals.  If I fear a dog, that dog is likely to fear me.  On the other hand, if I approach a dog with confidence and certainty, that dog is likely to respond in a like manner.

It is not a dog, however, I meet on the trail.  It is a Bigfoot wolf guardian the size of a horse that freezes in its tracks and eyes me with gold-flecked orbs whirling with an abyss of black intensity.  It raises its nose from the trail and retracts its lips in a grimace that bares long white fangs.

I know that it is no time to panic or react defensively.  What happens in the first few nano seconds of an encounter is what can determine the outcome of such a meeting.  I know better than to pause or diminish my presence, so I simply continue walking forward towards the wolf as if I own the trail into which he has trespassed.

I visually watch the vibrations of my words wash over the wolf’s fur and dispel the building aggression in its eyes and lips.  It is replaced by a quizzical look and a slight bowing of the head.

A shrill whistle disturbs the moment and the wolf gives me one last curious look, then turns and bounds off up the trail.  It yips and jumps playfully about as a young Sasquatch unexpectedly appears on the trail.  As with the wolf, I have no other option but to walk forward as if I belong there as much as they.  I reflexively raise my arm in a gesture of greeting.

The young Sasquatch says something incomprehensible and stops.  Seeing me progressing forward, it commands the wolf to its side with a slap of his thigh and another whistle.

I have progressed to within about twenty feet when I pause.

“Loquius,”  I say, and raise my hand to my brow.  I make a gesture as if I am looking for someone and immediately notice understanding registering in the young Sasquatch’s eyes.   He turns and looks up the trail behind him.  He raises his arm and points in the direction I am headed.

I smile and move forward into their immediate space and pass close enough to reach out and scratch the wolf on the chin.  Once behind me, I do not look back until I am well up the trail.  To my relief, there is no one there.  The boy and his wolf have moved on.

A Bigfoot wolf guardian of the wild also appears in my second book Conversations With Sasquatch, Cross Over. 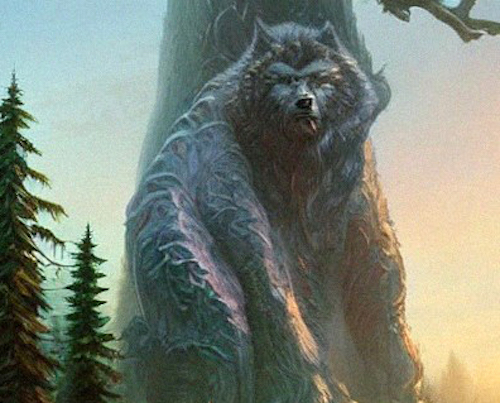 You can’t fool a wolf

on your boot bottoms.

They smell your intent

and perk their ears

at the beat of your heart.

They are the forest’s skin

covered with fur.  They are

the howl of the wounded

and the carnivore’s teeth...

but bow to the pet

and coo of Bigfoot.

More Bigfoot Poetry can be found on my Sasquatch Poetry page. 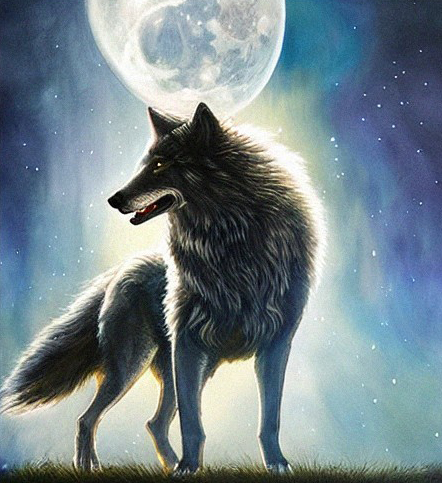 The Bigfoot Wolf guardian of the wild also has the Bigfoot magical power to cloak.  Even without this power the Bigfoot wolf is a master at stealth and concealment, so much so, they are rarely seen during a Bigfoot encounter in the human realm, even though the wolves are often in accompaniment with their Bigfoot sidekicks.

I have previously referred to them as pets, but that is a poor word.  They are more like symbiotic comrades with the ability to communicate telepathically with none another on all levels of existence.  What one gives to the other is a fine fabric of needs and wants for enhancing each others survival.  The Bigfoot Wolf Guardian of the Wild, though unbeknownst to most humans, is a huge asset to the Sasquatch and the preservation of our great forests of Earth.