Sasquatch Fishing is a common occurrence when it comes to encounters with humans.  We like to fish, too.  My first encounter as a child was at my favorite fishing hole on the Thunder Bay River, in North Eastern Michigan.  The sunfish were really biting that day and I was having a ball catching them with a cane pole and bobber.  Sunfish are extraordinarily beautiful in color and shape.  It just so happened that a Bigfoot was having the same entertaining enjoyment as I was and came wading down the river spearing some the fat pumpkinseeds* with a sharpened stick.   He would pierce them and toss them into some kind of basket bag wrapped over his shoulder.

At first I was just mesmerized and able to admire his skill, but then he drew closer and I got the fearful realization of just how big he was, twice the size of my dad.  I dropped my pole and bugged out.  That encounter can be found in my first Conversations With Sasquatch novel, The Encounter. 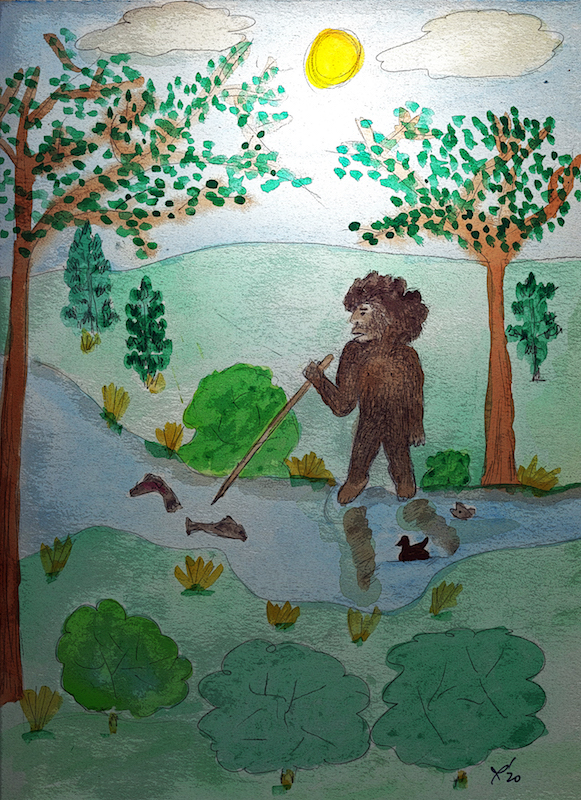 in a bosom of silence

broken only by loons.

the surface near shore

dead still as a stork….

Sasquatch Fishing As Part Of Their Regular Diet

Fish is a Bigfoot Staple.  They are often depicted as bloody meat eaters, but I have not seen that as a Sasquatch trait.  They are largely vegetarian or fruitarian with their major protein source being fish.  They are skilled in all forms of fishing including line and pole and netting as well as the spearing techniques.  They are astute at making fishing line from plant fibers and nets from the same source.  That plant has the common name of hibiscus but is less commonly known as kenaf.

Their preference for fish is sun-dried.  I was once out steelhead fishing the Alcona Black River and came across about twenty steelhead trout drying in the sun.  They had been gutted and hung on broken branches on a small island in the middle of the stream.  There appeared to be no one around, but my hackles could sense the Bigfoot eyes on me.  As much as I would have liked to take a couple of the trout home for dinner, I passed.