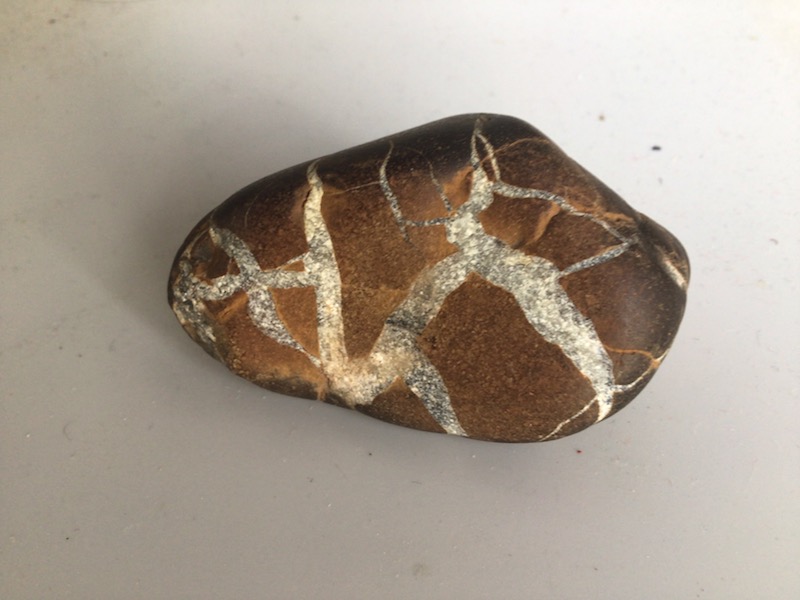 Early Autumn was an electric show.  We had some humdinger lightning storms, and after one particular doozy I went for a hike to visit Sasquatch message rock.

I love the smell of the forest floor after a fresh rain when the earth is damp and the sun rays dance in misty enchantments.  It is magical to see a warbler drink from a brimming cup of a leaf, then sing with joy: and an intricate gossamer web collecting tiny water droplets to create a rainbow as fleeting and illusive as the Sasquatch that have left me a beautiful striking lightning, medicine stone.

I am filled with gratitude and trade out the gift stone for the Granny Smith apple that I had brought along for a snack.  That is the way of the forest people and all our family of friends that come to visit message rock from the other side.

I was unaware of the significance of the lightning stone (Bigfoot Medicine Stone) when it was first gifted to me by the Sasquatch.  Since that time, I have come into the knowledge that this lightning infused rock is actually a Bigfoot Medicine Stone imbued with Bigfoot magic and intentions to repel the low level frequencies of negativity.  It is a healing stone with powers to help build immunity against all sorts of evil, including man-made biological atrocities such as the CV-19 virus.

This Bigfoot Medicine Stone is enhanced in effectiveness by one's own belief, intention and awareness, or neutralized in the hands of the small-minded skeptics who thrive on invalidation and negativity.  It is prized by Lakota Indian medicine men with knowledge of the skills needed for creating miracles.  It is meant to be worn by anyone as an amulet for protection as well as one's expansion of a greater sphere of positive influence.

This is my personal testimony to the Bigfoot Medicine Stone's healing properties...

Quite a few years back I was diagnosed by a whole gaggle of medical doctors as having high blood pressure.  They were very invalidating regarding my reluctance for the taking of drugs.  They resorted to various fear tactics and threats in order to convince me in their directives about the medications I would need to prevent a stroke.  Under the pressure and ignorance, I acquiesced.

The first medication I was prescribed was explained to me as being virtually free of any harmful side effects.  After trying it for several weeks, it actually proved to have a major  side effect in that it disrupted the electrical impulses in my heart and caused an electrical glitch called left bundle branch block.  I felt this electrical malfunction take place and it can be fully attributed to the drug Lisinapril, which they had so freely prescribed to me.

The result was that this so called harmless drug nearly killed me, not from a stroke, but from the medication itself. Another end result was even higher blood pressure.

I mostly recovered after discontinuing the drug, but I was informed the electrical disruption called left bundle branch block was permanent.

Since the malady of hypertension runs in my family, I decided to consult a family member's physician to see if that family member's medication might work for me without causing any further problems.  My family member had told me that they had had no serious side effects from the drugs they had been prescribed.

I tried the first of these medications at the recommendation of my doctor.  It was known as a water pill.  Again, this drug was said to be harmless, but guess what, it really messed with me.  It did something to my bladder whereby I ALWAYS felt I had to pee even when I didn't, an impossible side effect to live with.  I discontinued it immediately.

I was then given a second pill that had not adversely effected my blood relative.  This one finally did bring my blood pressure down, (though not to where normal has been proclaimated by the authorities) but it also slowed my heart rate down to less than 45 beats per minute.  I suppose for someone nearing the end of their life, that might be okay, but it made me feel like I was suddenly two steps away from my grave.  I immediately took it upon myself to cut this pill's dosage in half.  This half pill had my heart rate around sixty without any increase in blood pressure from the full dose.  This pill is called Bisoprolol-HCTZ.

I was then prescribed a second pill to be used in combination with the first.  This one goes by the name of Losartan Potassium.  The two pills together gave me vertigo and made it unsafe to drive on the highway.  I immediately cut both pill's dosages to one fourth the prescribed amount.  I once again got the same blood pressure readings from the quarter dose as I had had from the full dose.  Go figure.  My vertigo was now minimal.

I stayed on this reduced dose for several years, until one day I noticed my heart was skipping a beat every 6 to 10 beats.  I returned to my doctor and he sent me to the hospital for blood tests and an MRI.  The results:  I was told what I already knew.  I had an irregular heartbeat.  I was informed this was not uncommon.  Many people have this and live normal lives well into old age.  No mention was ever made that this condition could be the result of the medications.

Then I was gifted my Bigfoot Medicine Stone by the Sasquatch.  They also gifted me the miracle of Sasquatch Plasma Water.  Then, while tapped into the Sasquatch Stream of Consciousness, I got the telepathic message and intention to get off the blood pressure medications for good.  I immediately reduced the dosages even further, to about an eighth of the prescribed dose.  Bingo!  I now no longer have that skip in my heartbeat.  It is regular as the sun rises and sets.  Overwhelming proof that it was being caused by the medication.

By this point, if I allowed myself, I could very well get mightily pissed at the medical establishment.  But that isn't my way nor my point.  My point is:  WHAT THESE DOCTORS THINK THEY KNOW, THEY DON'T KNOW AT ALL.  All they do is guess and prescribe drugs.

A Bigfoot Medicine Stone, in combination with positive intentions, plasma water and Squatch-It Super Minerals, has been far more effective than the chemical poisons they call medicine.  My heartbeat is now once again regular, my blood pressure (though above their one size fits all "normal") is apparently what my body needs to perform at its best.  It is the blood pressure best suited for my genetic make up.  To put it bluntly, science as they call it, is very often wrong.  Not just a little wrong, but dead wrong.

I am not saying this is the case for everyone.  It is certainly the case for me.  I am a very active seventy year old.  I am not overweight.  I still traipse through the woods like a teenager.  I don't have any other maladies and the one the doctors were claiming I had, was a false declaration based on scientific false data..  I never had high blood pressure in the first place, except in their minds.   It was my mistake that I believed them.  I didn't observe and took advice from some overweight, highly medicated authority figures.  That is the way I see it.  There is no recommendation intended here for anyone else.  This is my own personal experience.  I am not responsible for any problems or conditions anyone else may have or develop as a result of my dissertation on my own experiences.  This is not in any way meant as medical advice, and blah, blah, blah.  You, and you alone are responsible for your own choices and conditions.

Speaking of present day choices, I have noticed similar abject wrongnesses in regards to some jabs being touted as a defense against a man-made virus called CV 19.  After what I have been through, I personally will not touch this stuff with a ten foot pole.  No mandate will be allowed to have authority over my choice.  I choose my own intention, plasma water, Just Squatch It Super Minerals, and a Bigfoot Medicine Stone over the serpent's tongue remedy of Anthony Fauci and his Big Pharma paid for CDC and WHO.  From my own personal observation, these jabs don't work and are dangerous.  I have had family members and acquaintances that have had serious side effects and/or have contracted the virus after being given the jab.  A couple of them have died.  That is not hyperbole, that is the truth.  I personally have not been sick.  I have worked to fortify my natural immune system while carrying on a normal life.